The earth is getting hotter!! The earth is getting colder!! Thousands of plants and animal species become extinct every year!! Cigarette smoke is a prime cause of global warming. Climate change is increasing the rise of super storms and dramatic weather. Massive hurricanes, colder winters, hotter summers, and tornados. Lions, and tigers, and bears - OH MY!

Most of the media agree with those statements. Most political liberals also agree. Most Hollywood celebrities agree, and Al Gore is their guru on the environment.

I read Al Gore's book Earth In the Balance. It's an interesting book because Gore relied on fear and shame to make his point. This may work if you’re Catholic, Baptist or just a typical American voter who gets his news in 5 minute bytes on TV or radio at the top of the hour, but never reads anything more challenging than the back of a cereal box. However, it's not difficult to see the flaws in Gore's logic, or as he calls it “An Inconvenient Truth."

Gore claims that scientists report the hottest years on record all happened in the 1990s, but it doesn't tell you that two British scientists say the planet has been cooling since 1998. Gore also claims that scientists are almost unanimous in their support of the notion that humans are responsible for global warming. Gore would like for you to forget that he was challenged by several of the VERY scientists he cited as agreeing with him when he presented a speech at the Kyoto Summit in the 90s. Seems Gore didn’t quite tell the whole truth because the scientists who came out actually said they were unsure if mankind was causing global warming.

Gore has also proposed a pollution tax. "Penalizing pollution instead of penalizing employment will work to reduce that pollution," Gore said in a speech at New York University School of Law. The pollution tax would replace all payroll taxes, including those for Social Security and unemployment compensation, Gore said. He said the overall level of taxation, would remain the same. And last week at the United Nations, Gore claimed that cigarette smoking was a leading cause of global warming.

"Smoking kills. If you're killed, you've lost a very important part of your
life." - Brooke Shields, an Al Gore supporter.

Many of the things that Gorenventalists claim as fact actually have an inconvenient truth attached to them - they are theories, not facts. But the truth has never been inconvenient for crusaders. It's easier to forgive when those lies benign - like Al Gore invented the internet! and I smoked but didn't inhale! - but it's not so easy when those lies have been responsible for the deaths of tens of millions of people. Environmental liberal do-gooders and militant socialists are responsible for one of the greatest crimes of the 20th century, on par with the Jewish holocaust and Stalin's mass murder of the Russian people by execution and starvation.

DDT was banned by President Richard Nixon's Environmental Protection Agency in the early 1970s, after Rachel Carson's book, Silent Spring, claimed to show that DDT threatened human health as well as bird populations. Rachel Carson was listed by Time magazine as one of 100 Most Important People of the Century. Also listed are 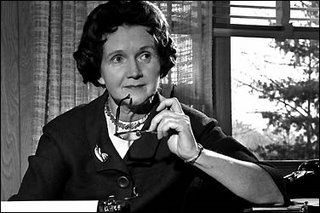 According to all the figures, Rachel Carson (pictured left) ranks third on the list of 100 Most Important People of the Century for deaths attributed to the actions and leadership of one person. She helped create a lot of silence in Africa.


Huge amounts of DDT were sprayed in America. People used to run toward the truck spraying clouds of DDT -- as if it was an ice-cream truck -- they were so happy to have mosquitoes repelled. Tons of DDT were sprayed on food and people. Despite this overuse, there was no surge in cancer or any other human injury. Nevertheless, the environmental hysteria led to DDT's suppression in Africa, where its use had been responsible for a dramatic reduction in deaths. American foreign aid could be used to finance ineffective alternative anti-malaria methods, but DDT could not.

Within a short time, the mosquitoes and malaria reappeared, and deaths skyrocketed. Tens of millions of people have died in that time. The rich white sanctimonious environmental militants slept each night in air conditioned homes while millions of poor African children died.

Last month, the World Health Organization announced that it supports indoor spraying of DDT. "The scientific and programmatic evidence clearly supports this reassessment," said Dr. Anarfi Asamoa-Baah, WHO assistant director-general for HIV/AIDS, TB and malaria. "DDT presents no health risk when used properly." Some environmental groups have also changed their anti-DDT tune, including Greenpeace, and the Sierra Club.

Last year, Greenpeace spokesman Rick Hind told the New York Times, "If there's nothing else and it's going to save lives, we're all for it. Nobody's dogmatic about it."

Easy to say now, Rick. But what about the mass murder of Africans who died when groups like Greenpeace (who are almost always rich, liberal whites) refused to budge on the ban? Might an apology be in order? Might a class action law suit be a possibility against Rachel Carson, the World Wildlife Fund, Greenpeace and the Sierra Club for actively keeping DDT banned for these decades?And now, these are the same people and the same groups that are pushing the global-warming scare. If so many 'experts' could be so wrong about DDT, why should we trust them now?

1. Rachel Carson did not claim DDT was injurious to humans. She asked questions, and she worried that no one knew whether it was safe, but in terms of human health, she put it in with a host of other chemicals that are also harmful to human health.

2. DDT was not banned because of dangers to human health. It was banned, for use on agricultural crops, because it destroys ecosystems (including those insects, birds, bats and other creatures that prey on disease-carrying insects including mosquitoes). DDT was banned on the basis of dozens of scientific studies that demonstrated the threat -- and two separate court orders that required EPA to consider the regulations because, in court, DDT was shown to be a very hazardous substance.

3. DDT use in Asia and Africa, against malaria-carrying mosquitoes, was reduced in 1965, because overuse of DDT in agriculture had bred mosquitoes that were resistant and immune to the stuff -- killing the World Health Organization's campaign to eradicate malaria. If blame needs to be established, it should go to those who overused DDT and made it impossible to continue the campaign.

4. DDT has never been banned in Africa, even under the 2001 POPs treaty. So what you're saying is that Africans were too stupid to use a poison they knew would work, though they had it, and it was cheap. Shame on you.

5. Rachel Carson warned that overuse of DDT would breed resistance -- she urged that we use "integrated pest management" instead to fight the vectors. That's what we use today, with great success.

You could look this stuff up.

By the way, malaria infection rates are much lower, and death rates are less than half, what they were at the height of DDT use. How is that possible, if DDT is a panacea against malaria?

WICKED CHARLESTON: THE DARK SIDE OF THE HOLY CITY

Mark's first book ... the REAL history of Charleston. NOW IN A FIFTH PRINTING!

A Few Of My Favorite Things

The only history of South Carolina's serial killers.